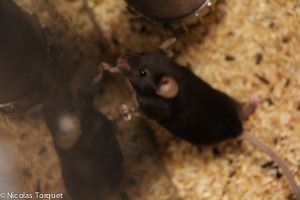 Nicotine addiction represents a serious social and public health problem. In this project, we will address a series of fundamental questions regarding the roles of nicotinic receptors (nAChRs) in the mechanisms underlying choice modification under drug exposure. Dopaminergic signaling is critical to the neurobiology of reward and motivation and the dopamine system constitutes the primary target of addictive drugs. Numerous theories have been developed to model addiction, but an important framework states that addictive drugs change the characteristics of dopamine activity in reward signaling and in decision making. Using behavioral analysis, in vivo electrophysiological recording and genetic tools to modify nAChRs expression, we will analyze the modifications of DA network dynamics in the different steps leading to nicotine addiction, including genetic and environmental factors, and the consequences of these modifications on decision making. Three main issues can be distinguished:

Neuronal nicotinic acetylcholine receptors (nAChRs) play a major regulatory role on DA transmission, controlling bursting activity or DA release. nAChRs have been strongly implicated in the pathophysiology of several psychiatric disorders as well as nicotine addiction and Alzheimer’s disease. However, progress in this regard has been held back by the lack of subtype-selective nAChR pharmacology and the difficulties associated with selectively targeting nAChRs in defined cell types and in different parts of the brain. 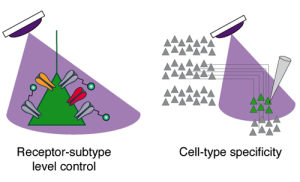 Optogenetic pharmacology combines the advantages of photochemical control with the specificity of genetics to enable precise manipulation of particular receptors and ion channels in particular cells (1, 2). This strategy involves the genetic engineering of receptors and their conjugation to a chemical photoswitch, allowing light to precisely activate or inhibit that receptor subtype in a given neuronal population. 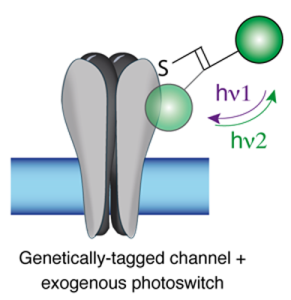 The photoswitch is made of a ligand (agonist or pore blocker/antagonist) on one end of the molecule, a central photoisomerizable azobenzene core, and a cysteine-reactive group on the other end of the molecule. The photoswitch can react with engineered cysteine point mutations in the receptor of interest, covalently tethering the ligand to the designed protein. Different wavelengths of light are used to isomerize the photoswitch between its trans and cis configurations, allowing light to toggle the ligand in and out of its binding pocket. 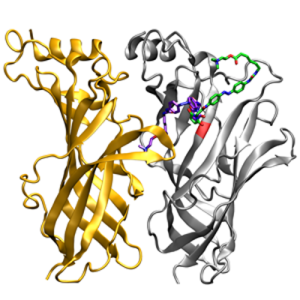 Such strategy will allow us to control an individual receptor subtype, i.e. the one containing the cysteine mutation, in a targeted neuron with high spatiotemporal precision, while leaving native receptors unaffected. The combination of rational design, specificity and precision makes this optogenetic pharmacological approach a very powerful tool for dissecting the roles of particular receptor subtypes in complex neural networks, both in vitro and in vivo.

Souris City is an innovative project that will allow to explore mouse behaviours in an environment more complex than the standard housing conditions. Indeed, Souris City is composed of several compartments connected through “tubes and scales”, resembling the natural living conditions of mice. Other modules allowing standardised testing of the animals will be additionally connected. The environment is also socially enriched, the group housed together being larger than in standard conditions. Mice are observed throughout night and day in the different compartments. Such a setting will allow to gather information on the hierarchical structure within a group and to combine this information with the performances of the animals in the standardised tests conducted in parallel.